This week we will take a look at the spread of the Battlefield315 videos across Europe. 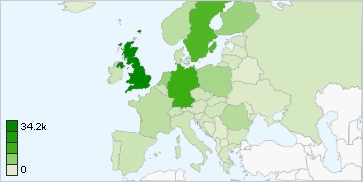 As the videos are in English, it comes as no surprise that the United Kingdom supplies the most traffic in Europe. Globally, the UK is only behind the United States and Canada. Ireland is also an English-speaking country, but it does not provide a disproportionate number of hits. But Germany, Sweden, and (oddly) Romania do...

The real effect of the English language is seen in the relatively heavy traffic from small British territories such as the Faroe Islands, Guernsey, Jersey and the Isle of Man.

Most of Europe is comprised of "First World Countries," but there is one country from which YouTube cannot report data: Serbia and Montenegro (not to be confused with Serbia). YouTube is also unable to report from the microstates of Monaco and Vatican City, which has a population of less than a thousand.

Battlefield315 has reached all of the European countries except for the microstates of Liechtenstein and Andorra, though it has received a hit from the microstate of San Marino.

Next Time: The Middle East.