Pass It On, Part 6: The Pacific

This week we will take a look at the spread of the Battlefield315 videos across the islands of the Pacific. 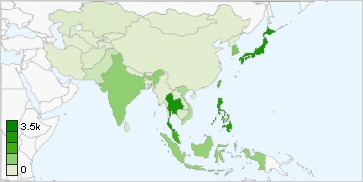 Though its economy is still developing, Indonesia has supplied a fair amount of traffic due to its large population--the fourth-largest in the world. Japan is the only other country in the Pacific with a population over a hundred million; coupled with its advanced economy, it easily boasts the greatest number of hits (besides Australia). The big surprise of the Pacific is the high degree of traffic from the Philippines....

The Philippines consistently supplies almost as many hits as Japan. Though formerly an American territory, its high degree of activity is simply an unexplained outlier, not unlike Thailand's.

Moving farther south than the YouTube's "Asia" map allows, Australia is the giant. Its population is actually less than one-fifth of Japan's, but its traffic is greater than the rest of the Pacific combined with the Asian mainland. Partly this is because Australia is an English-speaking country (only the United States, Canada and the UK have more hits). Some of the traffic is also due to the dispersal of the "Global Warming Panic explained" video by a popular Australian blogger in the wake of the Queensland Floods disaster in December-January. New Zealand supplies traffic at about the same rate per capita, but its population is much smaller than Australia's.

YouTube is able to report activity from many of the island groups of the Pacific, and the Battlefield315 videos have reached nearly all of them. Some, like Vanuatu and the Cook Islands, are familiar to Americans as exotic backdrops for the TV series "Survivor." They have yet to reach Samoa, however.