This week we will conclude our journey by taking a look at the spread of the Battlefield315 videos across Africa. 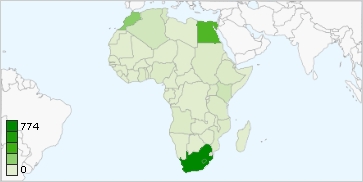 Africa is by far the least developed continent and supplies only a small share of the total traffic. Some third world countries provide more hits than all the countries of Africa combined. South Africa is the most active, accounting for almost half of the continent's hits. Egypt and Morocco are the other countries that stand out: Together with South Africa, they provide about three-quarters of Africa's traffic....

Most continents have a few countries about which YouTube cannot even report any data; Africa has more than half a dozen, including Zimbabwe, Chad, Sierra Leone and Swaziland, a country where the average life expectancy is just shy of 40 years.

Interestingly, nearly every country for which YouTube provides data has been reached: Only Madagascar, Guinea and Lesotho (despite being completely surrounded by South Africa) have not.

Libya has provided a few hits, but has been silent since the revolution began. Of the sub-Saharan countries other than South Africa, Kenya has been the most active.